Waiting for the Draedle (flash fiction)

I asked my diamond-plate coffee mug, “What on Earth is ‘flash fiction’?” Despite the big mouth, it was speechless. (HA!) 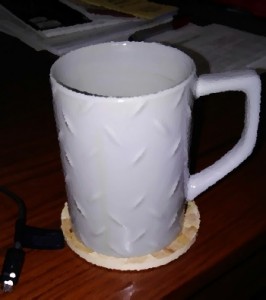 According to the experts at EveryDayFiction.com, flash fiction is a “…short story of 1000 words or fewer that can be read during your lunch hour, on transit, or even over breakfast.”

Well, shucks! I’ve got a bunch of those. They’re called ‘Awesome New Book Idea But Only Wrote One Bad Chapter Then Wised Up’

David Gaffney wrote this article for The Guardian in the blog ‘Stories in your pocket: how to write flash fiction’, where he calls them, “little fat monsters that gobbled up ideas like chicken nuggets”.

Last year, I’d entered a writing contest for members of one of my LinkIn groups to submit a 500-word max micro-story. There were two required themes: espionage and bees. Yeah, two words that go together like peanut butter and jelutong.

Here’s me accepting the prestigious award… 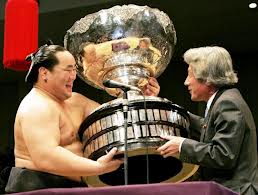 I have since grown a beard, and put a little meat on the bones…of the story, that is. It’s now up to the flash fiction size of pert-near a thousand words.

Here is Waiting for the Draedle. You can also get a Kindle-ready copy for download on my website, listed on the Extras page. 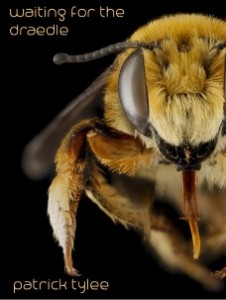 In the Draedles’ message to Earth, their call for help against the evil Mardon, they’d suggested we land on the dark side to hide our approach.

“Are we there yet?” Schumer asked.

We set up camp in the dark, the barest sliver of spring warming the horizon. The Draedle had said it would be up to three weeks for them to find us, once they detected our arrival.

“Let’s go over their message and our plan,” I said. As the commander of this interstellar strike team, it was my duty to verify that each member of this squad knew what they were doing and why we’d travelled so far, and all for a new sentient species the humans of Earth had only just heard from.

“The Draedles are being hunted to extinction by the Mardon. As the Draedles migrate from one side to the other, they’re attacked. They’ve no way to defend against the Mardon who possess significant technology.”

“Do we know what the Mardon look like?” Blazon asked.

“Yes, exactly. Apparently, everything is macro-insectoid.”

“And we can beat the Mardon?” Blazon asked.

“The Draedle said that the Mardon only have—”

“Hyper-Lasers.” Schumer said. We all winced to some degree.

“We hope, hence our mirrored shields to protect us. Our magna-fire rifles ought to be more than a match. We prepare to attack, training with our weapons in the lighter gravity of the planet, but we wait for the Draedle to appear, flying in from the sunny north. The Mardon should inevitably show up to flank them as they do. That’s when we roll in to save the day.”

“Looking forward to it,” Schumer said.

The three weeks came and went – no Draedle, nor the enemy, and it was still dark. Food rations and water were soon depleted.

“Commander,” Schumer said, “it’s been two months now. We’re starving. If we don’t find food, we won’t make it. When the Draedle do arrive, we’ll be too weak to help them. We’ve got to find something to eat.”

He was right. We’d die waiting for the Draedle. We needed to locate food, fill the stores and start the long trip back to Earth.

We found it easily enough; tons of it, in the trees. Huge fibrous casks filled with sweet, meaty cones. They were likely some kind of larvae, but they were so tasty. We ate till be would burst. Then we filled the ship stores with it. Schumer was good at finding them, in the caves under the tree roots. He seemed to delight in the daily feast.

It was three more months, waiting for the Draedle and eating the sticky goo and eggs.

Then we heard them – a rumble in the air. While we sat drunk with the addictive sweetness, the giant Draedle flew in. They were huge, and menacing. In fact, they weren’t friendly at all. As they hovered over our heads, we could hear them screaming at us. They were furious.

We were surrounded by a thousand or more of the massive bees. The smallest of them was half the size of our lander, with a twenty foot wingspan.

“Who are you and why have you murdered our offspring?” they roared.

“We are the humans of Earth that you called to,” I said. “We came to aid you against the Mardon.”

“We called to no one for help, and furthermore, you are collaborating with the Mardon! One of you is a Mardon. We can smell him!”

Schumer ran over and grabbed a rifle; started shooting the Draedle down wildly.

“Hold your fire!” I screamed. He ignored me, continuing to decimate the Draedle with the powerful weapon.

I ran to him, to grab the rifle, but he swung out with his arm to hit me in the chest. It was like being struck by an electric shock. As Schumer raged, his human skin began to peel away, revealing the bright orange exoskeleton of a wasp that was hidden underneath.

I wanted to stop him, to control the situation as any trained military officer should, but the bees were attacking from all sides, snapping their fierce pincers and flailing with long, barbed stingers that could impale a man clean through. Even the strong blast of air that fell down on us as the Draedle’s wings growled overhead was itself a weapon. We could scarcely breathe from the turbulence and dust.

We’d been fooled. Schumer, who had infiltrated our ranks – he was the real enemy of the Draedle. And his plan had worked perfectly. The wasps wanted the bees dead, and they tricked the warlike and powerful human race into bringing our deadly machines here.

My orders to ‘cease fire’ came out as a hoarse whisper, for I couldn’t bring myself to allow my men, these few who’d survived skirmishes with me before, to stand defenseless, surely to die.

I could only do one thing, take up my own magna-fire weapon, and join them in the destruction of the Draedle, the ones we’d come to defend.

The battle escalated. It was us or them.

In the end, we’d saved ourselves, but we wiped out the Draedle, their flaming corpses filling the air with sweet smoke, so incredibly sweet.